Yes, Sometimes It Comes To That 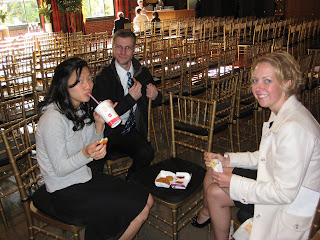 Jade, Eric and I enjoy the spoils.
A little over a week ago at my friend's wedding, there was a bit of a food shortage between pictures and the ceremony. Apparently the caterers expected fewer hungry people than there were, so we organized a McDonald's run. Jesse and Eric, Jade's fiance, took orders and were back in the nick of time. My favorite part was hearing Monica's elderly grandmother call out, "I ordered a hamburger and a Coke!" I don't know the last time I had chicken nuggets, but these were delicious. Fittingly, Jesse abstained because after owning his own chickens, he doesn't like eating chicken meat if he doesn't know it had a happy life. I, however, am clearly without scruples.
Email Post