Out With Politics, In With Potassium!

So Halloween happened a week ago, and I know I'm behind in reporting this. This woman, whose blog I read because she's hilarious and a fantastic writer, described her dogs' costumes and put up a few pictures and, lo and behold, I discovered a very personal connection.

My friend Andy has an infamous banana suit (maybe I should say banana costume?) he wears on occasion. We got to experience it twice in Croatia.

Here is Andy with Dario and Dario's dog, Magi: 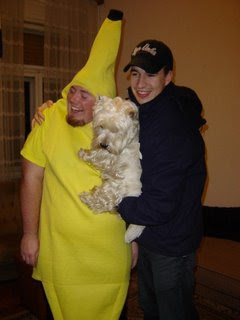 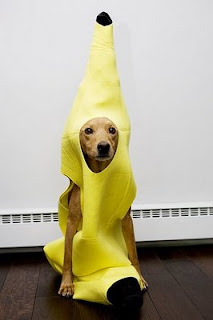 I think what happened here is pretty obvious. Clearly Magi was deeply moved by his experience with BanAndy and word quickly spread throughout the canine community. Because of the continent change, it took a bit longer for the idea to spread to Chuck (which must be why he wasn't wearing this costume in 2007), but this year his moment came.
Email Post