Whom Shall I Fear?

Way back in Croatia, I remember hearing Marni and Sara discuss an issue that is apparently common among new wives, and at the time I doubted I would be vulnerable to the same anxieties. They talked about worrying excessively that something would happen to their new husbands - they could be rock climbing, hiking, generally horsing around as young men are wont to do - and it would be very unnerving for the wife to sit back and wait patiently for a safe return.
At the time I thought I understood. I thought that when the time came, I simply wouldn't be bothered, that I would be more pragmatic, that I would be more trusting.
I was wrong.

In Hawaii we went to a lot of different beaches. Jesse's favorite thing to do was snorkeling, mine was body boarding. And every time he went off snorkeling, I worried:
"What if he gets attacked by a shark?" "What if he gets rammed into rocks, coral, the ground?" "What if he gets trapped by something underwater?" "What if a swarm of minnows suddenly turns hostile and ties him up in seaweed just to watch him drown?"
We quickly developed a system for checking in frequently, using arm signals.

One day in the middle of our trip Jesse started feeling sick. At first it was just a touch of nausea that we attributed to a bit of a late night the night before. But it got worse as the day wore on, and by that evening he was complaining of weakness and said his legs felt weird.
Now, admittedly, this was unusual, and would have been cause for concern had he not woken up the next morning feeling right as rain. But I was terrified. I was literally envisioning a trip home accompanied by a casket. As I thought through possible eventualities and determined various courses of action while laying wide awake in the dark that night, I started praying. It didn't actually comfort me all that much, though I did finally fall asleep. More than bringing comfort, the praying just drove home how little I was trusting in the Lord, and how much I had at stake, wrapped up in the man sleeping next to me.

The next day I was relieved to find Jesse healthy again, but disturbed at a deeper level by the new world of vulnerability I had just discovered. The whole day was colored a bit by this pondering, and by late afternoon I felt mainly calm and grateful. Reminded that we are small and largely powerless. Reminded that the gifts we enjoy are not in our hands to keep forever. Reminded that all is grace. Reminded that love is not ownership, that even things like marriage and childbirth do not entitle us to eternal dominion over another soul. 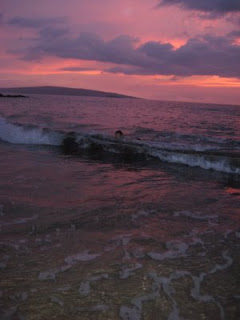 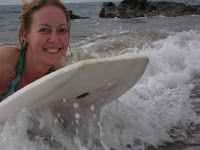 These pictures are from that afternoon/evening. The sunset was beautiful, and weirdly dark and ominous looking. It helped put everything back into perspective for me, and helped me once again to realize my tinyness and dependence on a loving and all-powerful Lord.

The funny thing is, I'm only writing about this today because I'm struggling again with the same issue. Jesse has a bit of a stomach bug. Maybe I'm not distraught with fear for his life, but I'm still worried. I still hate that I can't do anything to make him better. That I can't really tell how sick he is or is not or what caused it.

Oh, that I would trust the only thing that is trustworthy. When will I learn?
Email Post

Anonymous said…
I really love this post for so many reasons, Alexis. I love reading your blog. I think November may be my new favorite month since there's so much new material from you.
November 20, 2008 at 8:58 AM

kristen said…
Hi! (I'm a friend of Francine.) I can really identify with this post. My husband's being in mortal danger is a huge fear I have. I worry about car accidents, violent crime, eyesight strain... and it makes my heart catch in my throat to think about living without him. But you're right: love is not ownership, and he has never belonged to me. I love him because he belongs to the Lord, and he chose to spend his mortal life with me.
November 20, 2008 at 9:05 AM