Two for the Price of One

To reward you for your patience, you get to hear about two babies of 2009, coming to a Portland near you!

Firstly, Jesse's good friend Matt and his wife are expecting. I met Matt and Jesse at the same time a little over 3 years ago when they stopped by Croatia during their European tour. At the time, Matt was living the high life due to a nice long streak of success in internet poker. I have continually been impressed with Matt's ability to live on his own terms and roll with the punches - sharing generously when he's up, and working hard without complaining when he has to.

Here's Jesse, Tim, Sara, and Matt after a rousing game of soccer in Croatia back in 2005: 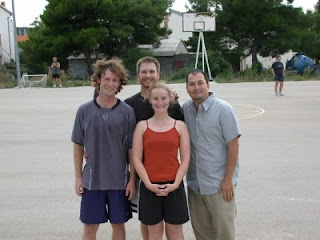 Even more exciting for me personally is the fact that we're going to be Uncle Jesse and Aunt Alexis within a year! After pestering Tim and Sara almost constantly in Croatia about when they were going to have kids, my waiting is over. Jesse's parents are thrilled, and Tim and Sara are tentatively excited. Now the pressure to be the first has been relieved (on that side of the family at least) and we can still enjoy all the fun things about having a new baby on the way to adore and shower with affection.
Email Post