The best thing that happened all week occurred on Friday morning. I was heading into work and Francine called and said the most encouraging thing I could have imagined. My memory of the conversation is imperfect, but it went something like this:

"Okay, so you know when there is a really bad storm out in the ocean, and the waves get really big and high? And if you’re in a boat, it’s rocking wildly and it gives you motion-sickness?"

"Well, I’m not trying to give you the whole 'when there is a storm at sea…' cliché thing, I’m here to say we’re dealing with seasickness. And no matter how bad it is, freaking out will only make it worse. This is normal, this is reality. I don’t want to quote verses and give you a bunch of crappy sayings meant to cheer you up. I’m sorry it’s not all rainbows and butterflies, but I just want to say that this is the way it is. And I’m there with you. And it will get better eventually, but we just have to wait it out. Because there’s no way to fix it. So, we’re in this together, we’ll just keep puking our brains out…"

I know this might not make sense, but for some reason, it was the perfect thing. It was an acknowledgement that nothing makes sense, that the world is swerving and spinning, that gravity doesn’t seem trustworthy and making decisions is impossible and I can’t trust my own judgment in any matter greater than picking out a pair of socks in the morning. So, starting with the assumption of near-incapacitation, the basic functioning that’s been required of me over the last 6 weeks seems more legitimately to be the heroic feat that it has felt like at times.*

This is not meant to alarm anyone. During the times when I appear somewhat normal I don’t think I’m faking it (except at work) – I don’t always feel like I’m in crisis, and if I’ve spent time with you and seemed to have a good time, I probably did. It’s just that way deep down inside, I’m kind of a total disaster.

And it’s not the culture, or the job, or this, or that, it’s just… everything? Nothing is wrong. But everything feels wrong, because I feel wrong. For now, swearing helps sometimes. And talking with a few people who feel, or have felt, exactly the same way helps. And time will help, I think. So thanks for bearing with me. I’ll just be here, leaning over the rail a little while longer. 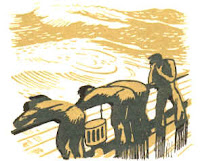 Anonymous said…
Who among you fears the LORD
and obeys the word of his servant?
Let him who walks in the dark,
who has no light,
trust in the name of the LORD
and rely on his God.

But now, all you who light fires
and provide yourselves with flaming torches,
go, walk in the light of your fires
and of the torches you have set ablaze.
This is what you shall receive from my hand:
You will lie down in torment.